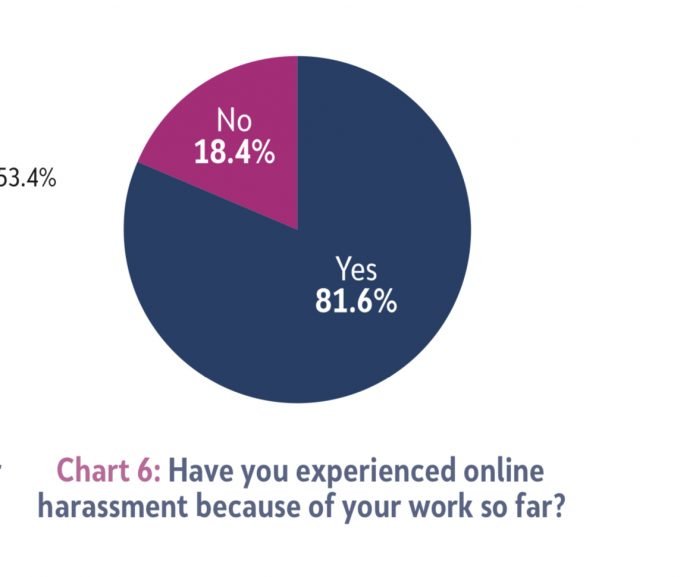 For the needs of the analysis of PINA, dedicated to the problem of harassment in the digital space, in addition to the analysis of domestic and international reports, legal analyses, researches and publications, interviews were also conducted with relevant stakeholders both from the field of journalism and from the field of gender based on violence, and a survey was conducted which was answered by 103 women journalists, 80.6% of whom have more than 10 years of work experience in the field.

According to data from a survey by the International Federation of Journalists cited in the PINA publication, 64% of women journalists have faced online violence, of which almost half (47%) did not report the case. The results of the PINA questionnaire show that in our country this number is even higher – as many as 81.6% of women journalists in the country faced online harassment because of their work, and almost half (43.7%) did not report the harassment anywhere, while the largest part of the rest (32%) reported it to their newsroom.

Over 29.7% of women journalists said that their photos were shared in certain groups on social networks, with the aim of discrediting them. 22% of female journalists faced online stalking, while orchestrated campaigns were organized against 18.7% of them. 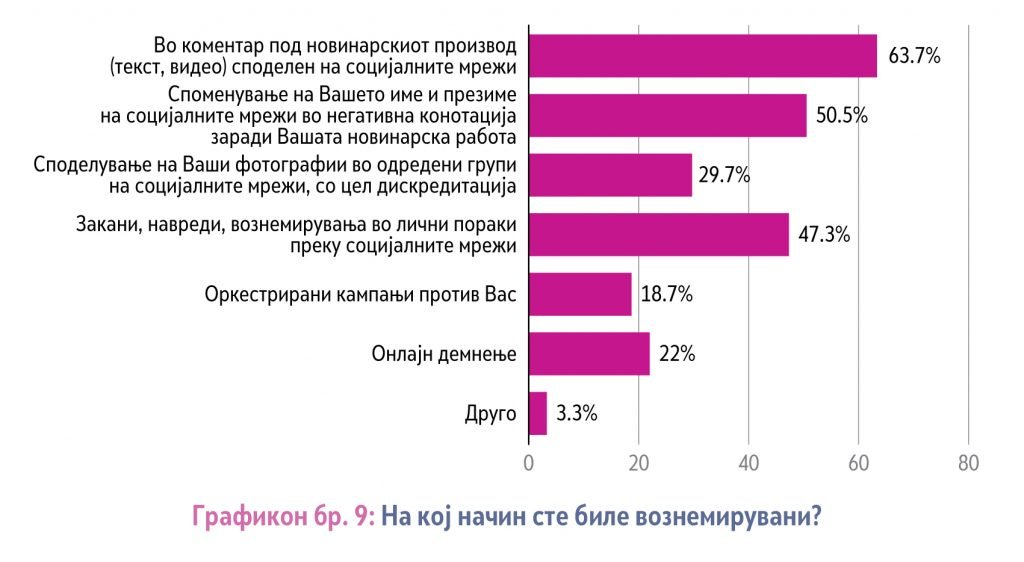 Although the majority (86.4%) of respondents confirmed that they are informed in which institution a case of online harassment should be reported, only 25.2% turned to the competent institution. Almost half (41.9%) of women journalists who reported online harassment and attacks were very dissatisfied from the cooperation with the institutions, and only two interviewees said they are satisfied.

The survey shows that most often (79.3%) women journalists said that they did not know the harasser, and even 89.9% of respondents were harassed on the social network Facebook. In the conclusions of the analysis, one of the stated problematic aspects is the failure to act of the Facebook platform when reporting online harassment.

In 74.3% of women journalists, the harassment experienced did not cause changes in further behavior and some respondents ignore such content, accepting it as part of the profession, which shows a high degree of normalization of online harassment.

As Bojana Jovanovska, author of the analysis pointed out at the Media Festival Skopje, organized annually by PINA, the aim of the attacks in the digital space is to silence the voices of the attacked, and indirectly to silence and discourage their like-minded people, as well as target groups that share identity characteristics with the primary victims of harassment. That is why the analysis is dedicated to women journalists, who as media workers are affected because of their public work, but at the same time as women in a patriarchal society.

According to the content of online harassment, hate speech dominates (69%), and sexism (51.7%) and chauvinism (43.7%) were demonstrated in about half of them. Attacks in the digital space turn into threats of physical violence (24.1%) and threats to life (19.5%). The data that even 36% of the respondents believe that they have faced organized attacks is also worrying. The entire detailed analysis of PINA can be viewed at the following link.

The first PINA publication “From normalization to self-censorship – Analysis of the online harassment of women journalists in N. Macedonia” was promoted recently at the Media Festival Skopje, accompanied by the short documentary film “Dangerous Network”, which examines the experiences of several women journalists who were the target of various types of online harassment.

Through the preparation of this analysis, within the framework of the project “Promoting the safety of female journalists and professional standards in the media” supported by the OSCE Mission in Skopje, the PINA platform, as an organization that since its foundation has been working to change the awareness of the position of women journalists in the Macedonian society, gives its contribution in an attempt to actualize this topic. The analysis was made in order to provide an insight into the current situation with online harassment and attacks on female journalists as a form of gender-based violence, as well as to identify possible solutions to reduce and overcome the problem, including mechanisms and resources to ensure adequate protection and help.

Read the full publication by PINA in Macedonian, Albanian and English language.

You can find out more about which cookies we are using or switch them off in settings.

This website uses cookies so that we can provide you with the best user experience possible. Cookie information is stored in your browser and performs functions such as recognising you when you return to our website and helping our team to understand which sections of the website you find most interesting and useful.

Strictly Necessary Cookie should be enabled at all times so that we can save your preferences for cookie settings.

If you disable this cookie, we will not be able to save your preferences. This means that every time you visit this website you will need to enable or disable cookies again.

This website uses Google Analytics to collect anonymous information such as the number of visitors to the site, and the most popular pages.

Please enable Strictly Necessary Cookies first so that we can save your preferences!